Since 2019, Toronto-based artists Vid Ingelevics and Ryan Walker have charted the progression of the Port Lands Flood Protection Project, one of the most ambitious civil works projects in North America. This second series of photographs installed on utilitarian wooden structures built for their CONTACT 2020 exhibition focuses on the complexities of excavating a post-industrial site and the resulting environmental cleanup.

A Mobile Landscape offers views of the vast, dynamic waterfront landscape lying behind the construction hoardings, and therefore unseen by the general public. Giant mounds of dirt suddenly appear on site, then vanish. Piles of rocks, metal, and concrete materialize in one place, only to appear elsewhere days later, thus creating a landscape that is always in flux. Ingelevics and Walker capture some of these fleeting moments on a site they describe as “a different planet” every time they visit.

In total, 1.3 million cubic metres of soil will be excavated for this project—enough to fill the Rogers Centre—and most of it will be recycled. What looks like a war-torn, sometimes lunar, wasteland is in fact a sophisticated and tightly choreographed scene. Mobile Landscape #9 (mounds), 2020 shows the variety of material piles that have been tested for quality, classified, and separated. They are tracked as they move around the site, waiting to be treated or recycled. The mound of clean drainage sand in the foreground of Mobile Landscape #5 (river valley), 2020 will line the newly excavated Don riverbed, visible in the background. These piles are transient, but so is everything else on site: human and machine imprints, materials and textures. In Mobile Landscape #6 (geotextile), 2019, a black sheet lies atop a layer of compacted soil to avoid the mixing of different quality soils. These strange textures and materials will eventually be covered over by the construction process as the entire site is “naturalized.” Historical uncoverings add another layer to the functional transience of the site. In Mobile Landscape #3 (breakwater), 2020, an archeologist measures a breakwall built in the late 1800s, the top of which once supported horse-drawn wagons, automobiles, and hydro lines for local cottagers to make their way to Fisherman’s Island, which has since long-disappeared.

One of the extraordinary effects of capturing this expansive, fluctuating landscape is that all sense of scale can easily be lost. Images turn abstract and ambiguous within the limitations of a frame: snow-covered soil mounds could be the Himalayas; runoff on a soil pile recalls the Badlands in Utah or Alberta. That is, until we recognize a piece of debris, or the tip of a crane, or a nest of rebar, or a small figure standing somewhere in the photograph, which snaps perspective into focus. The images in A Mobile Landscape hold viewers in a liminal, metaphorical space where, for a moment, one thing could be anything.

Presented in partnership with Waterfront Toronto 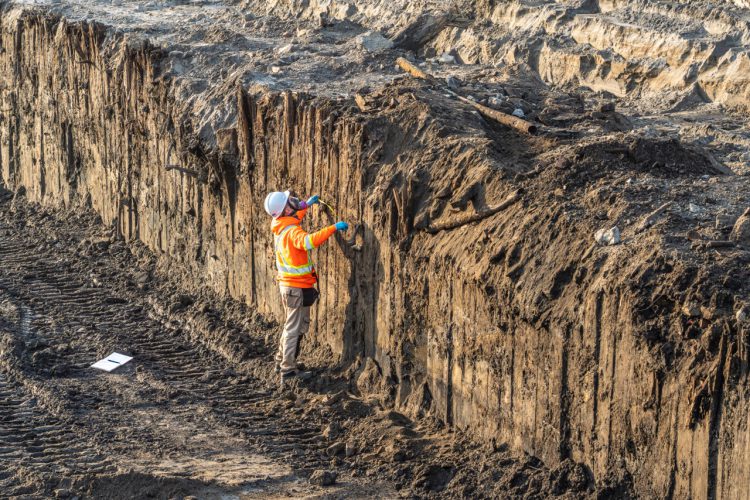 I’m Vid Ingelevics and I’m in my office at Ryerson University, Toronto. My work has generally followed two sometimes interrelated paths, considering the role of the archive and how we represent the past, and the nature of urbanity. I do so through a variety of media, including photography and video, often in an installation format.

This is Ryan Walker, and I’m speaking to you from my studio in Toronto. My photographic practice is rooted in a documentary approach to intimate storytelling. I’m really propelled by curiosity to explore our modern-day relationship with nature, which is both symbiotic and fraught. I’m especially interested in people and communities who model alternative ways of living with and off the land.

The work we’re presenting in CONTACT 2021, titled “The Mobile Landscape” is related to a long-term project that Ryan and I are collaborating on, a five-year commission from Waterfront Toronto to document the Port Lands Flood Protection Project, one of the most ambitious civic infrastructure projects currently occurring in North America. Our commission specifically mandates us to both document and interpret the vast range of construction work happening across several hundred acres of originally landfilled swampland at the mouth of the Don River.

This civic project includes the construction of a kilometre of new river mouth for the Don, which will result in a large public park on land that has seen heavy industrial use since the 1920s. This, our second publicly-accessible installation on the site, both curated by Chloë Catan, uses the door of a large concrete silo on Cherry Street, as well as a set of five 12-by-8 [foot] construction-grade billboards we have had constructed on Villiers Street, directly opposite the silo.

“The Mobile Landscape” is a natural progression from our previous onsite public installation, “Framework,” where we explored the Port Lands’ disappearing industrial infrastructure, and put forward the question of how the industrial history of the Port Lands may be referenced in the future. All of the images in “Framework” were taken through the doors and windows of buildings that now no longer exist, and showed views that also were no longer recognizable.

In our second year of the commission, massive excavation and earthworks began, which drastically transformed the landscape of the site every couple of days, we couldn’t ignore the many seemingly transient piles that were appearing across the site. We are drawn to this notion of capturing fleeting moments in the landscape. One day a pile stands mighty and imposing; the next day it is gone.

Our fascination with the site’s industrial past has carried over into this new body of work, as we referenced historical uncoverings that added another layer to the functional transience of the site. In “Mobile Landscape #3 (breakwater), 2020,” an archaeologist measures a breakwater built in the late 1800s that also served as a causeway for residents of the long-disappeared Fisherman’s Island. This historical causeway was buried when the adjoining marsh was filled in after 1912 to produce what we know today as the Port Lands and reappeared briefly in the fall of 2020.

While our installation is publicly accessible, our images depict moments in the construction activities that the public were not able to view behind the nearby hoardings at the time that they occurred.

But what we are showing each year has almost inevitably changed by the time of our installations. In that sense, as artists we are messengers offering to the public a recent and subjective visual history of this vast site.