Esmond Lee Gods Among Us

Esmond Lee’s ongoing project Gods Among Us presents a history of Scarborough’s diverse faith communities through representation of provisional architectural homes for places of worship. Often operating under the vernacular of industrial plazas and ubiquitous strip malls, these buildings provide important spaces for newcomers to socialize and to worship. The Scarborough-based artist and architect’s images of these meeting places are positioned on a curious architectural feature at Malvern Town Centre, highlighting the structure’s cathedral-like qualities.

Whether located in the corner of an old plaza or standing tall at a major intersection, the spaces that Lee has documented are more than just buildings; they are second homes for communities to come together and share their culture. Lee, a second-generation Canadian, remembers going to church with his mother and feeling a sense of unity within this newfound community. To immigrants, these places nurture the sense of belonging in a new land, and can lead to spiritual, social, and economic connections.

Lee’s research, often taking the form of meandering walks to far-flung plazas and strip malls, revealed that Scarborough is home to around 300 such improvised places of worship. Unlike central Toronto, where minority groups make up around 39% of the total population, the suburb of Scarborough has a vibrant immigrant community with an astounding 74% of residents identifying as visible minorities. As the number of newcomers increases, and the countries of origin diversify, so has the need for places of faith. With true immigrant resourcefulness, this sometimes means finding affordable, available space in unexpected, and even unlikely places—a mosque tucked next to a Pizza Nova, or a Pentecostal church in an industrial plaza. The multiplicity of these locations reflects the diversity of the communities that constitute Scarborough.

In this installation, Lee’s large-scale photographs are situated in a space similar to many of those he photographs: a structure in front of a mall, surrounded by a parking lot. His images heighten the resemblance of this idiosyncratic structure to the frame of a house or a cathedral, while maintaining its function as a path toward the mall. Not unlike places of worship, malls are a gathering place for people from all backgrounds, ages, and socioeconomic status. Viewing these familiar locations from a different perspective, Lee generates a typology of spiritual sites that invite contemplation of the possibilities therein.

Esmond Lee
Gods Among Us 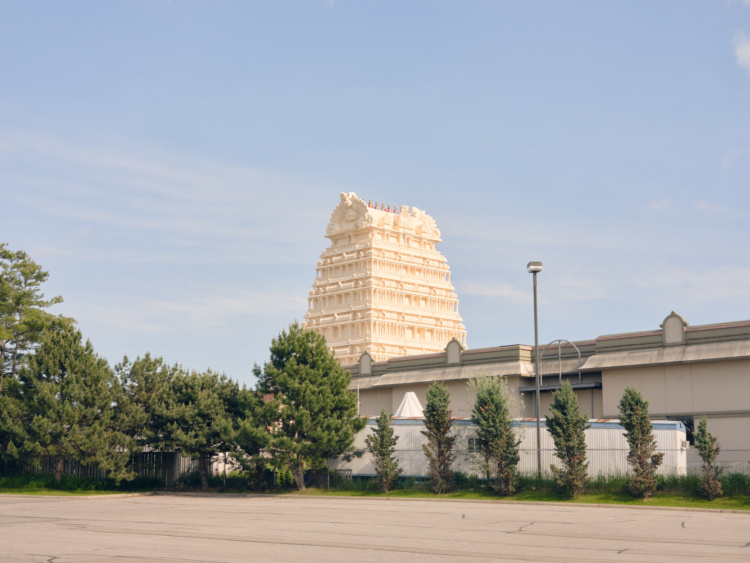 Hi, my name is Esmond Lee, and I am an artist and practicing architect speaking to you from right here in Scarborough. I am a second-generation Chinese Canadian and I explore long-term and intergenerational experiences of migration.

My work is informed by my architectural background where I examine identity, belonging, and borders in peripheral spaces like the suburbs. Part of my overall practice and in this project, Gods Among Us, is challenging the popular idea that the suburbs are uninspiring and boring. People typically think of the suburbs as just repetitive row-housing, concrete parking lots, and generic plazas. But on the other hand, when people think about culture and diversity, they imagine urban Toronto where all the mainstream events and festivals happen. Toronto likes to advertise itself as the most multicultural city in the world, but the fact is, we should really be recognizing the suburbs where the majority of racialized immigrants make their home. This arrangement isn’t by choice, and it’s the result of systemic barriers in Canada. De-skilling and discrimination in the labor market have forced racialized communities into the urban periphery, making them both socially and spiritually marginalized.

But despite all this, immigrants have managed to build vibrant communities throughout the suburban landscape. Places of worship are one of these important cultural institutions and community hubs that deserve our celebration. When I look at these warehouses or commercial plazas, I don’t see ugly buildings haphazardly put together; instead I see resourcefulness, tenacity and vigour.

Keeping a place of worship afloat is not easy, and requires a lot of community effort. These buildings demonstrate how adaptive immigrants truly are. For example, if you look carefully at one of my photographs, you see that a Hindu temple has found home in an old brick church. In another photograph, a mosque adopts an old farm church. Immigrants everywhere find themselves making do with what’s available. Over time, some communities even manage to find social, economic success, building freestanding architecture that rise high above into the open sky. I really want to recognize and celebrate these unique and varying cultural institutions that are hidden throughout Scarborough.

As an architect, I love the idea of adapting my photographs into an outdoor public installation, where art becomes part of everyday life. I’m able to engage with so many people that don’t usually visit art galleries, where it can be quite intimidating, with awkward social protocols. The mall is a casual place of gathering and the unique structure at the front of Malvern Town Centre offers an ideal site to adapt my project. This structure isn’t especially tall, but the tower-like proportions become a welcoming beacon that calls attention from afar. This is similar to how some newcomers see places of worship. I use my photographs printed on vinyl mesh as walls to enclose the existing structure to form a sort of building. I invite you to pass in and out of my building, and in a way, experience the collective community throughout Scarborough. For all of us that call Scarborough home, I want you to be proud of what we’ve built. Be proud of our hustle, be proud of where we’re from. It’s time for Toronto to see us.