Exploring questions of race, gender, culture, class, and their complex intersections, Frida Orupabo fuses together varied sources of archival materials to question colonial and modern representations of Black womanhood. Positioned on the façade of a Victorian-era building, monumental images by the Oslo-based, Nigerian Norwegian artist portray Black women’s bodies as sites of knowledge and empowerment.

Combining fragments of photographs sourced from digital and analogue media, Orupabo’s recent body of work, After Hours (2020), attempts to reconcile subjective experiences by examining the politics of care, childbirth, and mothering. Through an intricate process of collecting images and in-depth research, the artist explores power dynamics, especially the systems that undermine agency and propagate misogynoir—hatred and prejudice directed toward Black women. The first work in Orupabo’s two-part project is Woman with book (2020), which derives from this broader series and signalled a new direction in her practice exploring the (mis)treatment of Black female bodies.

Positioned on the north façade of 460 King Street West, Woman with book subverts the suppression of power and opens a dialogue with its surroundings. While holding a large, red book, the woman rests her foot on a stone plate overlaid with a painting by Francis Bacon. The pressure and restraint evoked in this juxtaposition suggests the dismantling of class; it also functions as a compositional strategy that more broadly references bodily form and physicality. Both propositions are open to interpretation.

The second collage, Woman with snake (2021), was created specifically for this project. With a tightly clenched fist, a woman wearing pirate attire stands beside a slithering snake. Her composure is calm and her stance is confident as she challenges the viewer, as though poised to negotiate, debate, or attack. Full of symbolism, the scene encompasses notions of transformation, healing, death, and destruction.

The women in these two images upend the use of knowledge as a tool of authority within both historical and contemporary paradigms. They assert a commanding sense of control as their agency is symbolically and literally heightened on the building. Referencing personal and political narratives to resist structures of disempowerment, Orupabo attends to the writing of herstory—recognizing and empowering women.

As large-format murals on the façade of a heritage building that has performed many different roles over the years, the layered elements of Orupabo’s compositions echo the site’s layers of history. Originally called the Garment District, the area formerly known for its “rag trade” now comprises entertainment and creative industries. Over the years, the building has functioned as a private home, sundry hotel, and global youth hostel; in the 1950s and 1960s, its “Cabana Room” was a notorious meeting place. Disrupting common conceptions of whose bodies belong where and why, Orupabo’s collages are likewise a fusion of histories, but they are built on her own terms. Offering new readings that both acknowledge and destabilize historically destructive forces against women, her works aim to shift perceptions and understandings of intersecting identities. Occupying the framework of a billboard in public space, Orupabo powerfully asserts Black womanhood, self-determination, and the construction of knowledge within the fabric of the city. 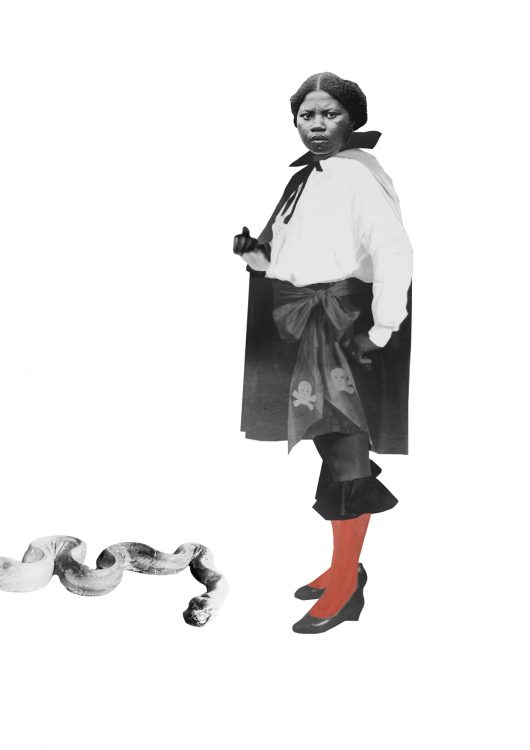 Hello, my name is Frida Orupabo, and I am an artist living and working in Oslo. My work consists of digital and physical collages in various forms, which explores questions related to race, family relations, gender, sexuality, violence, and identity. The last year, I also been working with sculptures.

For this project, I will be showing two collages. The first who is titled “Woman with book” is a work made for my solo exhibition held at Stevenson Gallery in Johannesburg last year. It depicts a woman who sits in a chair with a book in her lap. The second collage has been created specifically for this project, though is also related to the work “Woman with book.” It shows a woman standing with a closed fist and next to her lies a snake. As with “Woman with book,” she seems confident, determined, in control.

Both of the women confront us. I was thinking about control and power while making the collages, in regards to knowledge, what we know, what we can know, and how we create and use that knowledge. The work speaks to the act of taking up space, and to being in charge of one’s own narrative and life.

This will be the first time I show my work in a public space, which is really exciting. It will give people that usually don’t visit art institutions, for different reasons, access. And I feel that just by being there, taking up space, it challenges our notion of what we are used to see, who are allowed to take up space, who belongs where, and why.