In epoch, stage, shell, New York-based artist Kim Hoeckele confronts viewers with her nude body as it echoes distinct moments that have shaped the Western art historical canon and notions of Western beauty. Here, she proposes a messier standard of beauty: one that is mixed, eroded, and patched together. Co-opting the display mechanism of billboards, Hoeckele’s photomontages challenge viewers to consider the psychological violence caused by the idealization of women’s bodies both past and present.

Hoeckele’s photographic practice decodes theories and methodologies of representation from the past in order to better understand the present and in turn, the future. Her process involves meticulous research combined with material experimentation where the image points to influences far beyond the frame. Operating at the intersection of art history and advertising, epoch, stage, shell functions as a form of visual archeology bringing together numerous, seemingly disparate references and flattening them into fused images. While Hoeckele’s body occupies the majority each frame, in a single photograph her inspirations include a 7th-century Egyptian Block statue, Gustave Courbet’s L’Origine du monde (1866), Joan Miró’s The Birth of the World (1925), and the 17th-century alchemical symbol that represents the interplay of the four elements of matter, “The Squared Circle.” In another image, Hoeckele addresses surrealist photographer Man Ray whose Ingres’s Violin (1924) takes Jean-Auguste-Dominique Ingres’s Grande Odalisque (1814) as a point of inspiration for his armless, objectified female subject.

Hoeckele’s photographs don’t simply re-present and remix art history, they also offer a sharp critique. Many of the references used as visual building blocks in Hoeckele’s studio were originally conceived of by white men who have used women’s bodies in depreciative ways, and their impact can still be felt and seen today. Advertising perpetuates these same issues and creates impossible standards of beauty. Hoeckele argues that despite what people may think regarding feminist progress in these spaces, problematic strategies of representation continue to repeat themselves and are still covertly embedded in visual culture. Her works redirect viewers to the ulterior influences foundational to the visual language of advertising—a significant agent in generating social norms. Hoeckele’s images subvert this powerful and highly public context with photographs that have been spliced, fragmented, layered, and flattened into consolidated planes, introducing a necessary complication that exposes a singular truth: one image inherently possesses a multitude of others. 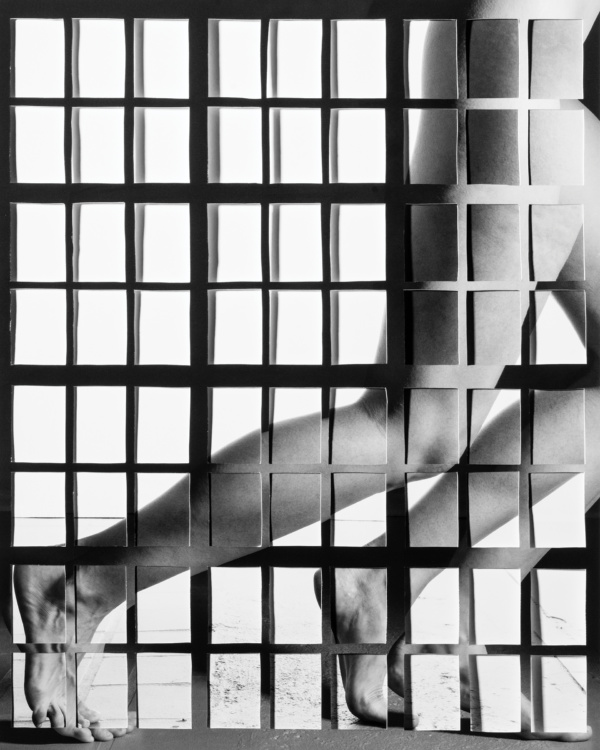 Hi, my name is Kim Hoeckele. I’m speaking from my studio in Brooklyn, New York, and I’m going to talk about my work titled “epoch, stage, shell.” This is an ongoing body of work that I started in 2018.

In my studio practice, I draw heavily from appropriated images and texts, which are often taken from antiquity, and then I use this research to examine ideas about gender and power that persist in contemporary life. I began the work “epoch, stage, shell” by sifting through hundreds of found images from art history books, from encyclopedias, and from fashion magazines. And then I started making relationships between the postures that I found in these images of ancient Greco-Roman statuary and those found in contemporary fashion advertising. I performed these sculptural poses for the camera, and then I cut up, layered, and re-photographed my collaged compositions to emphasize or disguise my material interventions. The resulting photographs render the images as both whole and fragmented. Physically cutting and assembling these photographs can evoke violence or erasure, or alternatively, the photographs can appear layered or reinforced.

The photographs refer to narrow ideals of Western beauty, but they propose something that’s messier and more complicated. For example, one of the photographs that’s located on College Street is titled “Back in S-Curve with marble fragments (attributed to Praxiteles or Klein).” Praxiteles was an ancient Greek sculptor who likely invented the S-Curve, and the Klein refers to to the designer Calvin Klein. The S-Curve is a sculptural convention used to shape the body to look more dynamic in ancient statuary, kind of like the letter “S,” rather than straight or stiff like a board. But contemporary models also pose in a similar fashion, shifting their hips and their shoulders to create this “S” shape. My photographic responses emphasize the reductive ways that women’s bodies have historically been presented and consumed. I’m distilling my references into something that may seem very recognizable in some cases, or familiar, but less placeable in others.

Contemporary representations of women’s bodies hold echoes of ancient and historical images. We hold these images in our bodies as subconscious instructions of how to perform in socially acceptable or appealing ways. Unsurprisingly, all the references I’m using have been authored by men, and they continue to reinforce the same impossible standards of beauty. In my photographs, I’m both the author and the subject.

By placing my photographs on billboards for the Scotiabank CONTACT Photography Festival, we were able to position them more explicitly in dialogue with the language of advertising. We chose specific placement more formally. For example, the grid of the windowed building on Dovercourt Road interplays with the grid of the photograph titled “Woman running (Nike or Nike),” while the photographs in a commercial area of College Street nod to consumption. The black-and-white photographs in my work “epoch, stage, shell,” with my unretouched and imperfect skin, stand in stark contrast to the glossy and saturated advertisements that would otherwise be in these locations. This asks viewers of the work and passersby to consider the consumption and idealization of women’s bodies, both past and present.