One by one, on each screen, avatars descend into the scene, as if rallied from a not-too-distant future. Young, confident, and Indigenous, they land on a rooftop and strut toward the camera, then seemingly through it, to exit the screen. They assemble on the concrete pillars, as human-sized cut-out still figures. Skawennati’s “machinimas” and “machinimagraphs”—respectively, moving and still images made in a virtual environment—point to the inherent politicization of Indigenous life on occupied land, and to an inextinguishable spirit.

Like models, they wear similar outfits­: a fashion line of “resistance wear” designed by Skawennati, called Calico & Camouflage. Conveying meaning through form, material, pattern, and colour, the collection is based on two articles of clothing that Skawennati associates with Indigenous people: the ribbon shirt and combat pants. Ribbon shirts, widely recognized as part of Haudenosaunee, Anishinaabe, and other Indigenous nations’ regalia, are traditionally made with calico-patterned fabric; they assert Indigenous pride in their continued existence in the face of attempted assimilation. Combat pants and other military garb, often employing camouflage patterns, are worn by Indigenous people around the world to demonstrations, protests, and other sites of resistance. In Skawennati’s collection, an updated camo pattern has migrated to the ribbon shirts, while two bold new calicos adorn the army fatigues, bringing the elements into a dialogue that references the history of contact and trade with Europeans; past and present acts of colonization and military aggression; and cultural revitalization. The gun-metal grey, powerful pink, olive green, and computer-screen blue colours are inspired by sites of activism, including city streets, rural roads, courtrooms, and cyberspace.

Like protestors, the avatars carry signs. They proclaim, in English, Kanien’keha (Mohawk), and Anishnabemowin, iconic statements such as “Water is Life,” “Black Lives Matter,” and “No More Stolen Sisters.” The artist is present through her own avatar, known as “xox,” whose message reads, “The Beginning is Near.” The tactical positioning of Calico & Camouflage: Assemble! at Yonge-Dundas Square activates Skawennati’s prevailing belief that “The Future is Ind!genous,” as another protest sign declares.

The insertion of these cyberpunk demonstrators among beacons of merchandising and marketing foregrounds activism and simultaneously projects it into the city’s present and future. Speaking to shared global concerns through the united languages of protest and fashion, Skawennati’s work brings Indigenous realities, values, and voices to the forefront of collective consciousness and demonstrates that “Resistance in Fertile” in both digital and physical worlds.

Co-presented with the Yonge-Dundas Square 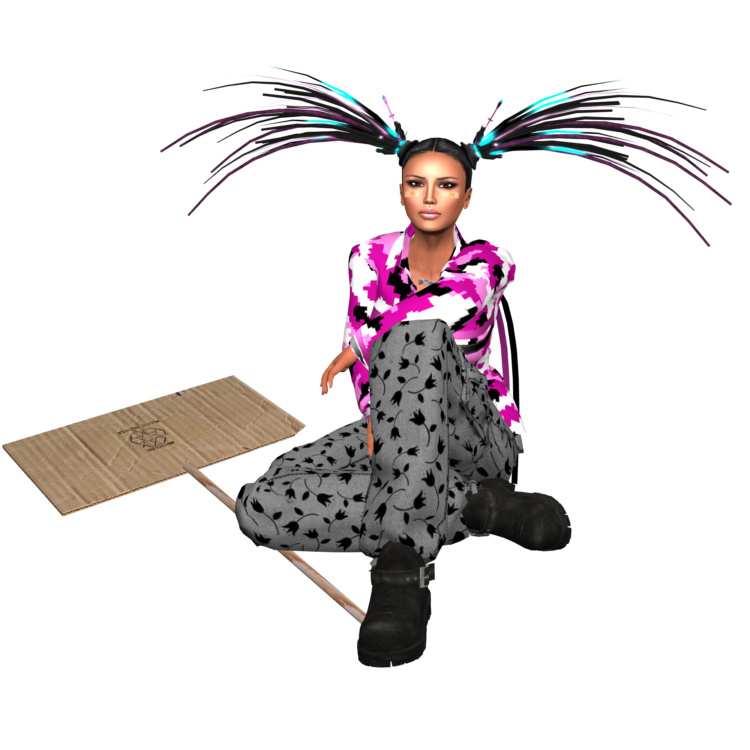 She:kon! Tahnon Watkwanonweraton! Hello, and thank you for taking a listen. My name is Skawennati and I’m an artist. I’m also a Kanien’kehá:ka or Mohawk, originally from Kahnawà:ke, a reserve not far from Tiohtià:ke, Montreal, where I live. My project is called Calico & Camouflage: Assemble!

Calico & Camouflage began as a fashion collection that I designed to answer that important question, “what to wear to the demonstration?” Of course, I was not the first to ask. Well known activist and artist, Ellen Gabriel also did and created a satirical camouflage fashion show in response. Calico & Camouflage takes the idea a step further by putting the camouflage pattern onto our traditional ribbon shirts, while the calico, which is usually on the shirts, is now on the army pants. I’m imagining that, as you listen, you are looking at the project, either online or in person at Young/Dundas Square, and you are seeing my beloved Activist Avatars, each one wearing a unique outfit and holding a protest sign. It was very exciting for me to envision them interacting with Real Human Beings in a public space. Usually they can only interact with you in virtual space. I am also aware that Toronto is in the territory governed by an ancient agreement, known as the Dish with One Spoon treaty, between the Anishnaabe and the Haudenosaunee. This is why the signs are in Anishinaabemowin, Kanien’keha, and English. The avatars are in two places. First, they arrive on the scene via the screens that are surrounding the space. And they arrive from above, perhaps they were hovering, flying –I’m not sure– and they land on the top of a building. And then they walk right into the camera. Or maybe they’re walking into a portal, which then allows them to be in the real world. And then, the other place that you can see them is on the pillars.

My thought was to print those avatars at relatively human height so that they would seem like they were protesting in that square and that if other people wanted that they could join a protest. And I also was hoping people would take their pictures with them. So if you are there, go ahead and take a selfie with one of the Activist Avatars. And, heck, upload it to your favorite social media platform and hashtag it #calicocamouflage. Niawen’kó:wa! Thank you for listening! Ó:nen Ki’wáhi.