In her photographic series Plastic Ocean, Dutch artist Thirza Schaap addresses the global plight of plastic waste in the world’s oceans. Positioned along the Davisville subway platform, her images of carefully composed sculptures appear beautiful and delicate. A closer inspection reveals that they are constructed from bits of scavenged plastic the artist has found along the seashore.

When Schaap began to spend winters in Cape Town, she started walking her dog every morning at a nearby beach. She watched the choppy, cold waves push debris from the ocean’s depths, scattering the sands at her feet with plastic remnants, the shallow grave of consumer products such as bottles, bags, and straws. These fragments of once-functional wares were, like sea glass, pleasingly rounded and faded, making them strangely delicate in shape and colour—beautiful shards of human consumption.

Schaap began collecting the debris, in part as a cleanup effort in tandem with her own commitment to living plastic-free, and in part as creative recycling. At first, she rearranged elements quickly and instinctively at the beach; eventually, she started to bring her finds home, creating more elaborate tabletop sculptures in her backyard, constructions that played on the candy colours and fanciful feel of the materials. Over time, Schaap’s sculptures have become increasingly abstract, and sometimes darker, though they remain whimsical.

Schaap’s photographs draw on the contemporary aesthetic of commercial still-life advertising imagery to make carefully framed views of each constructed display, full of graphic allure. In the installation at Davisville station, Schaap’s images take the place of traditional advertisements, usurping space usually reserved for traffic in consumer culture, sometimes flogging the same things seen washed up in her photographs. Her works offer a twist on the images normally seen in these spaces, serving as reminders of the endless life of plastic objects cycling through our lives, and eventually, the earth’s waterways, and of the detrimental effects of convenience and consumption. If advertising plays on desire—for beauty, status, and satisfaction—Schaap’s images gently ask viewers to reconsider material wants in the wake of climate disaster.

The earth’s floating “garbage patches” are growing in size and number, pulling debris into their orbit like giant oceanic planets. The largest to date is off the coast of Hawaii, and holds about 1.8 trillion pieces of plastic weighing close to 80,000 metric tons. Schaap thinks about Plastic Ocean as a way to raise consciousness of these facts, and offers the images as part of the growing global community working, in big and small ways, to address the plight of plastic waste.

Supported by Pattison Outdoor Advertising and the Mondriaan Fund 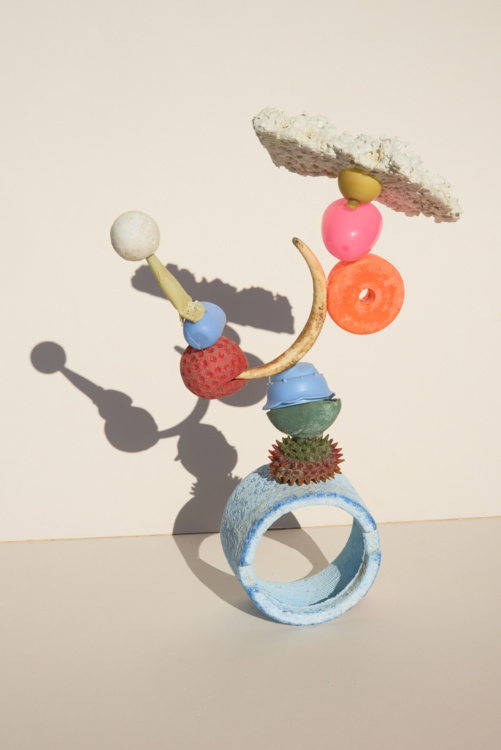 My name is Thirza Schaap, and I’m talking to you from my garden studio in Cape Town, as you can probably tell from the sounds of the many birds visiting me daily. A mere seven minutes’ walk from my studio is the beach, and that is where my project Plastic Ocean all started five years ago.

Walking with my black-and-white poodle, filling my pockets with little shells, and later on, also tiny pieces of plastic, by the end I was dragging big bags, and filling them with all kinds of plastic waste I found at the beaches. But being a photographer, I had the urge to document what I found, the unbelievable amount of plastic and the different pieces of plastic I found which came up with different currents. So I started the project as a pre-project: catch of the day, pick it up and throw it away. A kind of a funny thing for Facebook. I photographed what I found, took everything away, put it in my waste box, and then photographed the nature without the plastic; before-and-after pictures.

It was still kind of harsh, and disgusting, to see the amount of plastic in the beautiful landscape. There was a duality between what I liked about plastic and real disgust and hate about plastic. I liked the look, the faded colours, the feeling that the pieces have been in the water for a long time, and have traveled for a long time, as they could tell a story, like when you go to a secondhand market and you see furniture that has been pre-owned.

At one point, I decided to take some of the pieces home and not throw everything away in the recycle bin, because they’re also kind of beautiful, and that’s where this whole contradiction in the work started. The pieces I found, sometimes I found them beautiful and I was almost touched by them, the colours, the shapes… sometimes you see the little shells grew on the surface of the plastic. Next to that, it’s obviously so sad that all the pieces have come from the ocean and has been ended up there somehow through the rivers from the ships, or just blown in the ocean.

Taking the pieces back to my studio, I decided to isolate them from the location where I found them. I took them out of nature, and placed them in front of pieces of paper, pastel papers, colourful papers. I made a little set outside in my garden, and I played with a hard, midday sunlight or with a with a shadowed light falling through the trees. Most of the time, it was kind of a balancing act, the creations and compositions I made. I was stacking the pieces next to each other and sometimes hanging them with a little string, to be like a one-minute statue. Often they’d just fall apart, while I’m photographing or after I photographed them.

I wanted to show first my friends and later, through Instagram, the world, what I found on the beaches, because when the time… I wanted to show the world what I found, because being in Amsterdam for such a long time and most time of the year, the problem is almost hidden for us. Everything there—the streets are swept nicely clean, and we have the idea that recycling is a solution, so as long as you take all your single-use plastics to the recycle bins, it will be fine. Now when I’m looking back to it, I think we are all kind of fooled by the recycling. Only 10% of the plastic has the quality to be recycled.

And that’s not only for Amsterdam; I see here in Cape Town on the more touristic beaches, which are also cleaned at the end of the day, you won’t find that much. But while traveling and driving on our road trips to South Africa and walking the desolate beaches, we found an amazing amount of plastic. We were carrying large bags from the beaches back to our car. And then you really see that we’re kind of fooled and that it’s really time to change.

The good thing is that from higher hands, from our governments, that there should be regulations about single use of plastic. But I believe that we have to start today and we are not in a position to wait. So I think we should all start today, and all start to make the right choice. Of course, within your own capability. I can imagine when you are, for example, in Amsterdam, when you have two little kids, and you live in a small apartment, it’s not so easy to use fabric diapers. But you have to do what you can. I think all the all the little steps help.

I went through this big realization, that the whole recycle thing is actually not true. And then, how much can I change, myself? Sometimes you decide, for example, to eat something that night, but you cannot find that in your shop without plastic packaging—you can also decide to eat something else. So you have to be much more flexible, instead of choose by whatever you see, whatever you have in mind. There’s also a whole planning thing to go with that. So, the best thing is, like the whole part can go out. So there is much more planning involved; you have to think what you want to eat that week, if you go to that market on Saturday, where you can buy without plastic packaging.

But back to the project. What I wanted to show, something different [than] what I knew before, and that were pictures of seabirds with a cut-open belly, where I saw all the fragments of plastic in all the bright colours, and it just broke my heart, when I was looking at that. I wanted to do something else, because what that seabird did to me was that I, I looked away and I didn’t want to think about it. I knew for sure that was not my fault that a bird died with plastic in the belly. So that didn’t work for me, feeling responsible for the plastic in the world. So I found another way to enter the mind of the audience.

I kind of seduced them with the sweets, allure, still-lifes, and the beautiful compositions, to get the audience closer and let them pause, and then realize what they’re looking at, because you’re you’re just looking at waste, you’re just looking at trash from the ocean. So that way, I think, through my art, I can get into people’s minds and houses, and let it be a friend, let art be a friendly reminder of what we should do, how we should change and get rid of that comfortable last-minute decision we make in the shop.

At one point, I found it such a shame, after photographing the compositions, just to put them [either] away in the recycling bin or put them in my storage room to use later for another project or something, and that’s the moment when I started gluing them together. And now that is totally out of control because the whole studio is full now with all kinds of sculptures, assemblages, and that became very important of my work. I also found it such a different thing to do, instead of just photographing, but really building them up with my hands as a sculpture. That opened a door for me, which was not to be stopped.

Then a whole time came when I was just making one sculpture after the other. I photographed them afterwards, and sometimes not—they’re still waiting in line. I photograph them in different ways. It is a little bit of a different approach to get the artworks, so it’s either way: I play with the shadows and the light in the garden when I make my compositions of the pieces, or I go to my storage room and make a sculpture which I photograph later. Of course, the lights can also be part of the shadow-play of the artwork, but it feels a little bit different.

I’d like to invite you all to look at the works, and to look at yourself, and think, what can you do to change rhythms or things you do that are not necessarily that good for the environment, and you can kind of easily change. It’s also important that you don’t have to be too radical. It’s not that you have to be somebody who doesn’t care, to somebody who doesn’t use plastic at all. You always have to be a little bit nice for yourself and not too strict. But I think it is time that we all change and there’s no way back. It’s time for the change.