Presented on free-standing walls positioned throughout Allen Lambert Galleria, this installation by Italian photographer and journalist Alberto Giuliani focuses on forces at work across the globe to safeguard ecological and societal longevity. Shown in the heart of Canada’s financial district, distinguished by its towering skyscrapers and economic prosperity, the artist’s incisive works open a dialogue about the future of the planet.

Underscoring the urgency of environmental action, this selection of images from the series Surviving Humanity (2018) and their accompanying texts resonate with the glass atrium of the Brookfield Place galleria, commonly described as the “crystal cathedral of commerce.” Framed by the building’s steel support structure, which evokes a forest canopy, the installation confronts the question asked by Giuliani’s children that motivated his extensive explorations: “How will the world be when we grow up?” In the following statement, he elucidates the project.

Many years ago, my early infatuation with travelling led me to a small town in India called Vrindavan. It was there, under an ancient sky suffused with the aroma of spices and Indian incense, in a crowded alleyway and amid the pungent odours of exotic foods being cooked on every corner, I met Mr. Sharma. He was a venerated Brahmin from whom people sought blessings and favours, but more than anything, they went to him to know what their future held. Mr. Sharma was famous for his powers of divination and, allegedly, his premonitions were never wrong. He invited me to his home, a luxurious townhouse filled with magnificent furnishings, kilim rugs on the walls and a hexagonal fountain in the centre of the courtyard. He seemed to have something important he wanted to tell me and his expression did not bode well. “Give me your hands so I can read your future. You will die young, age forty-five.” With these words the Brahmin had sealed my fate.

From that day on, my life as a journalist and explorer revolved around a single goal—to find a way to defy death, someone who could reverse this horrifying prophecy and, in a much broader sense, to learn how the massive changes facing the planet were being addressed. For the first time in world history, these changes were jeopardizing the survival of a large part of the population. After all, there was a prophesy for that too—humankind itself was said to face extinction.

In pursuit of such answers, I crossed the globe, from the desolate wastelands of a dusty America to the suburbs of great Asian cities, from down south in Cornwall to the North Pole. I climbed atop vertiginous peaks, I traversed a volcano under which astronauts were simulating life on Mars, I descended to the centre of the earth, like Orpheus going into the underworld to retrieve his true love, only the steps I took led to the cities of the future, havens deep in the earth’s core, safe from outside cataclysms. The things I learned, and the people I had the privilege of meeting—scientists, luminaries, astronauts, researchers, visionaries, politicians—were more than anything I could ever have imagined.

They all agree that for the first time in our history we risk going extinct. Deforestation, desertification, war, migration, global warming, unprecedented famine, will bring human existence to an end. The meteorologists at Ny-Ålesund, the permanent research institute at the northernmost location in the world, all said it; American millionaires are in no doubt about it and have already purchased a home in one of the luxury underground bunkers built to provide shelter from the apocalypse; NASA astronauts frequently say it, having spent years studying how to survive on other planets when our own forces us to abandon it.

But we know all this already. It’s part of our past. What we still have to fully comprehend is what we’re doing to assure our survival in the future, and what the future of our species might be. For the first time in human history, survival is no longer just an ambition, a biological instinct, but a commandment, a goal to be pursued at all costs. Surviving Humanity explores the many things science is doing to prepare for our future, from cloning to biospheres, cryo-preservation, and genetic experiments, taking the viewer to places in which the last remaining humans are mounting the ultimate resistance.

I met with NASA astronauts heading for Mars, the inventors of Japan’s humanoid robots, and people freezing themselves until they can be reborn. I lived with guardians of the climate at the North Pole, talked to people hoping to redeem mankind and save the world’s forests under huge glass domes. I spoke to scientists who built an artificial sun more powerful than the real one and met with politicians who aim to save biodiversity by locking it in a bunker. I’ve seen people ready for the apocalypse, eaten transgenic fish and vegetables that don’t exist in the natural world, crossed paths with researchers who clone, snip, and re-stitch DNA at the vanguard of eugenics. I sought guidance from all of them and asked my questions about the future. But like me, all they can do and are doing is looking for a way to defy death.

____
Reflecting the brutal realities of a newly erupting global pandemic, in 2020 Giuliani created San Salvatore, a unique online project commissioned for CONTACT. Examining the unfolding effects of the COVID-19 pandemic on frontline workers in the San Salvatore Hospital in his hometown of Pesaro, Italy, this touching profile includes Giuliani’s reflections alongside striking photographic portraits and quotes from the medical professionals he documented. It paints a picture of fear, exhaustion, bravery, survival—but most of all, endurance—in the face of an unknown future.

Presented by CONTACT in partnership with Brookfield Place. Supported by the Istituto Italiano. Part of ArtworxTO: Toronto's Year of Public Art 2021–2022

Alberto Giuliani (b. Pesaro, Italy, 1975) is a photographer, journalist, and videographer whose photographs have been published in numerous magazines internationally. His stories have been featured in Vanity Fair, El Pais, MarieClaire, La Repubblica, and Stern among others, and he has completed web and video campaigns for international companies and NGOs. Giuliani has published several photographic books and is also the author of Gli immortali (2019), a book about the future of humanity, now translated into German, Spanish, and Finnish. 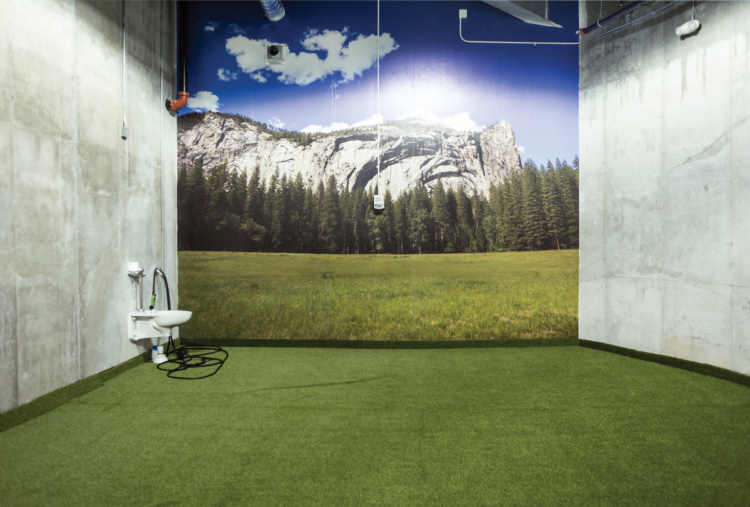 Hello, my name is Alberto Giuliani and I’m recording this from my home in Pesaro, Italy. I wanted to tell you a little about my work, Surviving Humanity, they’re the series of pictures that you are about to see.

It’s always a little tricky explaining what I do to others. I could make it sound very glamorous by using the word “storyteller,” were it not for the fact that, at least in my country, that’s not a real job. I came of age in the world of journalism. I started off by taking pictures for some of the world’s most well-known [news]papers. Then, about 15 years ago, I started writing and publishing my own pieces in many of Italy’s most well-known publications. These stories were often picked up and translated by foreign press and international papers like El Pais or Stern. Transitioning from photographs and words to moving pictures was a relatively simple step. That’s how I came to be making documentaries today for many large companies. As you will already have gathered, it rarely matters which medium I choose these days. What I really love, more than anything, is simply telling stories.

In Surviving Humanity, what you will find is a collective story, a tale that belongs to all of us, a story which has only just begun, as it explores our future. The whole thing started with something my four-year-old son Ernesto said while he was watching television. It was 2016, and somehow, he had found himself watching scenes on the news showing the war in Syria with migrants fleeing across the Mediterranean. So, he turned to me and asked, “Papa, what will the world be like when I’m big?” It’s not easy to find a convincing answer to that question in today’s time of uncertainty, but while I was trying to work out how life will be for the next generation, I discovered that scientists and governments have already been working on imagining our collective destiny, built in worlds that are very different from ours, quite distant from anything that we know now. So that is how Surviving Humanity came into being.

This job has taken me to meet NASA astronauts running trials for life on Mars on the slopes of the Mauna Loa volcano in Hawaii. The six young space pioneers have been working for a year, cut off from the rest of the world, developing techniques for growing vegetation and food in the most hostile climate and terrain imaginable. They have perfected this home, readying it for Mars, and now await their departure from Earth. Much farther north, in the tiny Arctic village of Ny-Ålesund, in Norway’s Svalbard Islands, I visited the research station where scientists from around the world have grouped together to study climate change and monitor the melting of glaciers, and sudden changes in our atmosphere. Surfing the waves of gravity they explore distant stars, shooting lasers into the stratosphere to gather climate change data for the world’s leading universities. From here they sound the alarm, warning world governments that we are now at the point of no return. Perhaps this is why only a matter of kilometers away, in the island’s capital Longyearbyen—all of the world’s countries, including North Korea and Syria, have deposited seeds from their countries in the Global Seed Vault, a bunker deep below the ice that has been specially created to protect biodiversity, safeguarding samples from harm or loss due to accident or disaster.

In Phoenix and Detroit, I’ve met with the founding fathers of cryonics, working on human cryopreservation, discovering that 700 people have already decided to freeze their remains in the hope of coming back to life in the future. In China and Korea, I examined cloning and the modification of human genes, all teetering on the brink of genetics. Surviving Humanity has led me to meet humanoid robots which, even today, already play a role in Japanese society. You can find them in hospitality, healthcare, teaching, and even filling the void for would-be parents. In Cornwall, I visited the Eden Project, with the world’s largest biosphere, a symbol of man’s triumph against adversity, as well as the place where it is hoped that the biodiversity of tropical forests, currently facing devastating losses in the natural world, can be preserved. In the United States of America, I climbed down into the doomsday bunkers of those readying themselves for a future apocalypse.

My journey into the future was cut short by the pandemic, which naturally took me back home to Pesaro, the tiny city where I live, a place which, for many weeks, was one of the cities in Italy hardest hit by the spread of COVID and related deaths. In the deserted streets of those days, my journey towards the future found me wrapped in the trappings of hope. There is little we can do in the face of nature and destiny. But perhaps imagining what tomorrow might bring can lead us to think more carefully about exactly what it is that we are doing here and now, in the present. Here is wishing you a pleasant journey through our future.