In her practice, Ethiopian-born, South Sudanese, Narrm/Melbourne-based artist and writer Atong Atem explores migrant narratives, postcolonial practices in the African diaspora, and concepts of identity, home, and liminal space. In her project Surat, Atem revisits family photo albums spanning decades and continents, restaging and reimagining the scenes and characters within, celebrating the visual language of family photographs, and photography as an extension of oral tradition.

Commissioned by Photo Australia for PHOTO 2022 International Festival of Photography, Atem’s new photobook of the same name, Surat—which translates from Sudanese-Arabic as “snapshot”—is prefaced with an essay by her father, the journalist and former South Sudanese Deputy Minister of Information Atem Yaak Atem. In it, he discusses the impact of photographs within the context of his own work, in which an image that he shot in 1984 showing the Sudanese rebel movement preparing for battle made its way to international news outlets and eventually to Sudanese President Jaafar Nimeiry, whose (mis)reading of that single photograph was taken as an impending threat to his own military forces. Reflecting photography’s broad contexts, functions, and impacts, in the section of the essay titled “Family Photos,” he goes on to discuss the very personal role of photographs within the Atem family.

“My daughter, Atong, has photos of her childhood, her siblings, and family members. Her mother, Abul Malual, who was born in the metropolitan Sudanese capital Khartoum, has her own photos as well as those that belonged to her parents and siblings.

“I happen to be the odd one out, in that my own parents and siblings, who were born and grew up in rural parts of what is today South Sudan, never had the chance to have their photos taken. Taking pictures was a totally alien culture to them. Only my third elder brother, Arok, who died in 2010, has left us with a photograph, taken for his membership card when he registered in Northern Sudan for the SPLM [Sudan People’s Liberation Movement].

“As someone born and—for the first eight years of my schooling—educated in a rural setting, I do not have childhood photos. The first picture of me I can recall is a group photo taken in December 1960 by someone who went to our elementary school as an invigilator for the entrance examination. I have not seen that photo, but the man […] is still alive according to a former colleague who met him about ten years ago. I hope, then, that I will be able to lay my hands on that first photograph.”

Considering the exponential proliferation of photography over so few generations, and the now-widespread ability for almost anyone to depict themselves as they wish to be seen via digital photographs and social media, the elder Atem’s experience contrasts starkly with his daughter’s. She has the agency to create innumerable self-styled images that explore and explode the tropes of photographic representation, with all their ingrained colonial histories and influences. Surat futher honours the Dinka tradition of record keeping and archiving as an intimate cultural practice, but for Atong Atem, the project is also about movement, both geographic and historic—her work plays a critical role within the broader global discourse of photography and the African diaspora. As she explains, “It’s about South Sudan, so-called Australia and everywhere else in between that I’ve rested my head to dream about my people—or rather, the depictions of people I don’t know but am connected to through photographs.”

Concluding his essay in Surat, Atem Yaak Atem projects a wish for photography’s promise to be fulfilled: “I am happy to see the power of photography continuing through my daughter’s work here in Australia. I hope that through sharing these histories, they will refuse to be forgotten over time.”

This project is part of an exchange between CONTACT and PHOTO 2022 International Festival of Photography (Australia). In addition to their own presentation of Surat, PHOTO 2022 presents Headdress, an outdoor installation of work by critically acclaimed artist/filmmaker Dana Claxton (Hunkpapa Lakota, born in 1959, Yorkton, Canada; lives in Vancouver, Canada), on view April 29 – May 22 at Collingwood Yards Courtyard in Melbourne.

Presented by CONTACT in partnership with PHOTO 2022. Supported by PATTISON Outdoor Advertising. Part of ArtworxTO: Toronto's Year of Public Art 2021–2022

Atong Atem is a South Sudanese artist and writer from Bor living in Narrm/Melbourne. Atem has had exhibitions at Melbourne’s Immigration Museum, NGV’s Triennial, Melbourne’s winter arts festival Rising, Messum’s Gallery (London), and has had works featured at Red Hook Labs (New York), in the Vogue Fashion Fair (Milan) and at Unseen Amsterdam. She has been commissioned to adorn two façades of Hanover House on Melbourne’s Southbank, and in 2021 she released Banksia, a video exploring African immigration to Australia. 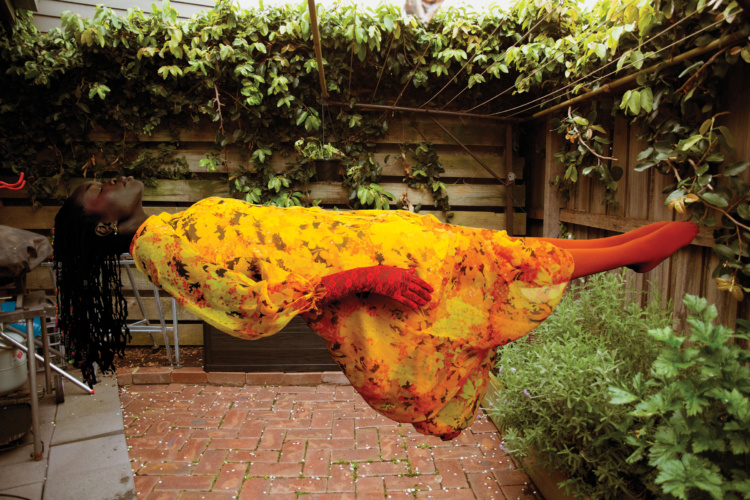 My name is Atong Atem; I’m a South Sudanese artist and sometimes writer based in Narrm/Melbourne, Australia. My work this year for the PHOTO festival is the photobook called Surat, which is the second installment of PHOTO Editions, and I guess in a lot of ways this work addresses the question or the concept of being human, in a very intimate and personal way.

I suppose being human is something that I constantly try to think about and interrogate in my practice, in a lot of different ways. And specifically, in this body of work, my relationship to being human is being tested, maybe? Or, at the very least, being performed in a very obvious way to, maybe, draw attention to the fact that there’s just so much performance, inherently, in human-ness.

The work consists of a series of self-portraits of myself, in the style of, or imitating, portraits of family members that are in my family photo albums, which were the foundational, kind of, objects of art in my upbringing. So in performing those photos, in performing the iconography of photography and iconography of, specifically, studio photography, there is a LOT of space between “being” and “human,” i.e., you know, the act of being versus the performance of human-ness. So much of it comes from colonial ideas of who and what a person is, and colonial notions of who gets to be a person or a human. But there’s also a lot of kitsch, and celebration, and tongue-in-cheek, kind of, cheekiness and self-awareness in the work as well. So, yeah, I think the work that I’ve made for PHOTO festival this year, just continues to ask what it means to be human rather than offer very specific answers.