Focusing on the physical connection between Black male bodies by amplifying the symbol of the du-rag, Esmaa Mohamoud confronts the dynamics of gender and race. Both of the components of her two-part commissioned project—a massive photographic mural on Bay Street, unveiled in June 2021 and on view until April 30, 2024, and a bronze sculpture installed at nearby Harbour Square Park, unveiled in September 2022 and on view until September 15, 2025—assert a commanding occupation of public space. Foregrounding the powerful symbol of the du-rag, the Toronto- and Markham-based artist opens a dialogue about systemic inequity, while signalling positive change.

Mohamoud’s multidisciplinary practice speaks to the historical precedents that incessantly propagate power imbalances. She explores how racialized bodies navigate complex social, political, and cultural landscapes, as well as the ongoing paradoxes of Blackness—its hypervisibility and invisibility. Addressing the racial disparities that are frequently encountered, performed, and resisted, the African Canadian artist offers a meditative reflection on interpersonal relations as they continue to be reimagined and redefined. For The Brotherhood FUBU (For Us By Us) (2020–22), Mohamoud shifts her focus from the institutional context of a gallery or museum to present her work in civic space—where it is always accessible to all people. Comprised of a photographic image and an interrelated sculpture, her project explores the relationship between two Black male subjects. Standing in the water of Lake Ontario, the men in the photograph are joined to one another with a two-headed du-rag, which is also the subject of the striking new sculpture. Mohamoud describes her project concept:

Placed near the waterfront with its densely populated leisure destinations, Mohamoud’s photographic mural and bronze sculpture will be on display over the span of two years. As people around the globe deface, topple, and remove memorials that venerate the protagonists of racism, enslavement, colonization, and genocide, space is created for authentic narratives to emerge. The Brotherhood FUBU refutes imperialist traditions and offers spirited gestures that celebrate the cultures and communities oppressed by such structures. The work opens critical conversation about the racist systems that require radical change, and it stands for the necessary changes that are, hopefully, on the horizon. 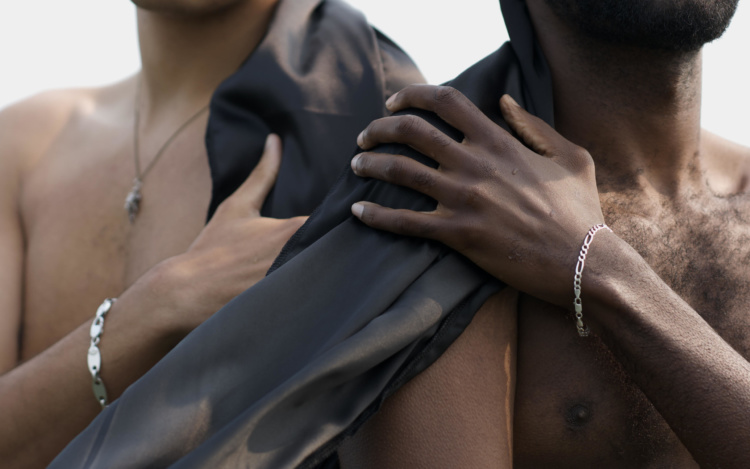