Sasha Huber’s multidisciplinary practice investigates colonial residue in the environment, highlighting the ways in which history is imprinted in the landscape through acts of remembrance. Rentyhorn (2008) documents a reparative intervention led by the Helsinki-based artist to rename the Agassizhorn, an Alpine peak named after Swiss-American glaciologist and “scientific” racist Louis Agassiz (1807–73). The mural captures Huber looking out over the Agassizhorn while holding a plaque arguing for the mountain’s renaming—a reminder that the gallery site is also embedded with colonial histories.

The contributions Agassiz made to the fields of glaciology, paleontology, and geology resulted in over 80 landmarks (and several animal species) bearing his name on the Earth, Moon, and Mars. Less well known, however, is his legacy of racism. Agassiz was a pioneering thinker of apartheid and used his position as professor of Comparative Zoology at Harvard University to actively promote the subjugation, exploitation, and segregation of Black people and other people of colour. In 1850, to help “prove” his racist theories, Agassiz commissioned Joseph T. Zealy (1812–93) to use the then-new technology of photography to document, against their will, seven enslaved people—five men and two women—on a South Carolina plantation.

In 2007, Huber was invited to work alongside the transatlantic activist committee “Demounting Louis Agassiz,” which had been petitioning for the Agassizhorn to be renamed Rentyhorn in honour of Congolese-born Renty—one of the seven enslaved people forcibly photographed for Agassiz. The Swiss-Haitian artist’s resulting intervention on the mountaintop not only drew much-needed international attention to the campaign but also presented a roadmap for the ways in which one can tenderly, and with care, refute the damage already undertaken by history. Rentyhorn thus captures a moment of introspection as the artist looks down upon the summit of this contested mountain and prepares to install, albeit temporarily, a metal plaque engraved with Renty’s portrait and a short text arguing for renaming the Swiss peak. Shortly after the intervention, Huber created an online petition addressed to the public, and in 2008, Huber and the Demounting committee’s founder, Has Fässler, sent a series of letters to the local council, the United Nations, and to UNESCO’s Executive Board and Advisory Committee. Having now garnered some 3,000 signatures worldwide, Huber’s petition remains active.*

Huber employs photography here to challenge the terms by which we remember, asking not only who and what we memorialize, but also, and more importantly, how we do so. Her large-scale image—facing Lake Ontario—points to the resonance of these issues close to home, as The Power Plant and Toronto sit on the traditional gathering place for the Mississaugas of the Credit, the Anishnabeg, the Chippewa, the Haudenosaunee, and the Wendat peoples.

Rentyhorn is a prelude to YOU NAME IT, Sasha Huber’s first solo exhibition in Canada, on view at The Power Plant Contemporary Art Gallery from February 5 to May 1, 2022.

*To add your signature, you may access the petition at www.rentyhorn.ch.

Sasha Huber (CH/FI) is a visual artist of Swiss-Haitian heritage, born in Zurich in 1975. She lives and works in Helsinki, Finland. Huber’s work is primarily concerned with the politics of memory and belonging, particularly in relation to colonial residue left in the environment. She uses and responds to archival material in performance-based interventions, video, photography, and collaborations. Huber has had numerous solo exhibitions and participated in the Venezia (2015), Sydney (2014), and São Paulo (2010) biennales. She holds an MA from the University of Art and Design Helsinki, and is undertaking PhD studies at the Zurich University of the Arts. Huber also works in a creative partnership with artist Petri Saarikko. In 2018 Huber received the State Art Award from the Arts Promotion Center Finland. 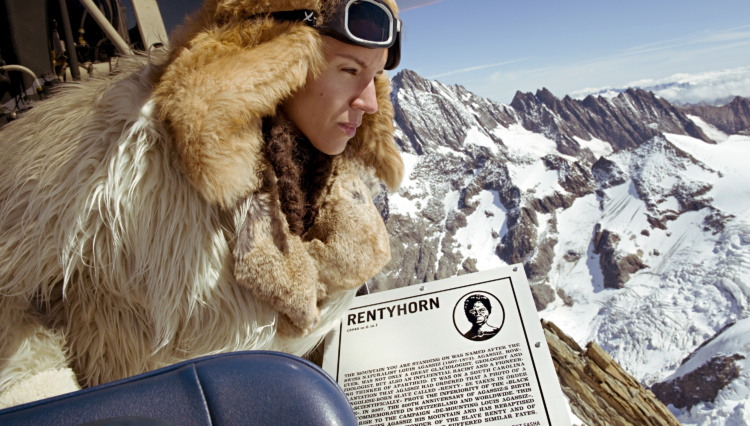 Hello, my name is Sasha Huber and I’m a visual artist based in Finland. I’m originally from Zurich, Switzerland, and I have roots in Haiti as well. I work with different kinds of mediums; I started off working with a staple gun, which was, for me, a way of responding to, oftentimes, colonial history, and using it as a weapon. But then I, in 2008, started to work with reparative interventions, like performative works which I then filmed, or got filmed, and the documentation of this one-time performance or intervention, is that the one that I’ve been exhibiting, and then I work with photography, with drawing, publishing, art-book publishing, and collaboration. I collaborate a lot with different people, wherever I go, most of the time.

And what happened is that in 2005, I read a book about Swiss involvement in slavery and slave trade, which I didn’t learn anything about at school, and it was written by Hans Fässler, a historian from Switzerland, and I somehow felt determined that I need to meet him. And that’s what I did—I contacted him and we met and that’s how we became friends. And I’m speaking about this now because it relates to the, to this big artwork called “Rentyhorn,” that you see here.

I made this work in response to the campaign that he started, called “De-mounting Louis Agassiz.” And it was about renaming a mountain in the Swiss Alps called “Agassizhorn,” we renamed into “Rentyhorn.” And Louis Agassiz was known as being a glaciologist, mostly, but in 1846, he moved to the States and he became one of the most influential racists of the 19th century. He saw there Black people for the first time, and he used the technology of photography in 1850 for the first time, to portray, or document, enslaved people and try to prove the inferiority of Black people with these photographs. And Renty was one of the persons photographed. He was from Congo, still, and he was working on this South Carolina plantation.

The idea of the renaming was in honour of Renty, but also of the people with similar fates. And I felt determined to do something more than just writing letters to the government and the communes, but to actually go there, and that’s how I developed this reparative intervention, to the mountain, and, physically, symbolically, but physically renamed the mountain and this was the starting point for me, to then continue this in different countries around the world.

And now at the moment, I’m planning an intervention in Nunavut at the Agassiz Ice Cap, which is 21,000 square kilometers—big. And I’m planning to go there together with the throat singer, singers, Charlotte Qamaniq and Cynthia Pitsiulak, and we met in 2017 already, during a residency in Gatineau. And we were supposed to do it already last year, but, and now this year, but now it happens next spring, I hope, and it will be then shown as part of my touring exhibition “YOU NAME IT,” which will be presented here at The Power Plant as well. So it’s, I’m really happy that the work can be shown now, it was supposed to be exhibited with the group—eh, with the whole exhibition already, but since the pandemic happened, it was not possible. So this is kind of a starting point, for you to see. And to see then what, what comes all together into this exhibition at The Power Plant.