Vid Ingelevics & Ryan Walker How to Build a River

Since 2019, Toronto-based artists Vid Ingelevics and Ryan Walker have charted the progression of the Port Lands Flood Protection Project, one of the most ambitious civil works projects in North America. This third series of photographs, presented on wooden structures along the Villiers Street median, focuses on the extraordinary operation of building a new mouth for the Don River and the careful methodology employed in the naturalization of a massive industrial brownfield.

The first photographic series that Ingelevics and Walker produced about this site, titled Framework (2020), captured the buildings and structures demolished to make way for the river excavation. This demolition allowed for the massive movement of soil captured in the second series, A Mobile Landscape (2021). How to Build a River documents how this soil removal made way for the river to be constructed using bio-engineering practices. It reveals the innovative bioengineering techniques used to construct this complex ecology and its multiple engineering layers, which will soon be invisible—either submerged underwater or beneath park surfaces—when the project is finished.

As the excavation has proceeded and workers have brought materials to the site and carefully categorized, prepared, and positioned them, Ingelevics and Walker have witnessed the river’s path quickly taking shape. The images in this series follow the rigorous steps taken to protect the new riverbed and future ecosystem, with multiple layers of sand, charcoal, and impermeable geosynthetic clay liner added to block contaminants caused by almost a century of housing fuel storage tanks in the Port Lands. The photographs capture the ways in which the new riverbanks (known as “crib walls”) were stabilized with logs, tree trunks, rocks, and coconut fibre material, and track the meticulous creation of future habitats for fish and birds.

Fish Habitat (2019) shows the development of a new riparian habitat, which includes coloured streamers strung across the water to deter geese from landing and eating vegetation that will provide food for fish. In Stratified River Ingredients (2021) a worker strides past stepped blankets of biodegradable coconut fabric, which will help hold the riverbank soil together until plant root systems are in place. In this series the new river comes to life. Its plants and banks, its roots and rocks and sands can all be seen coming together in Meander (2021). All of these innovative bioengineering techniques have been employed in similar projects around the world where nature is fast-tracked, but it’s unusual to have so many techniques applied simultaneously, and on such a vast scale.

At times during this massive project, something as small as an unidentified plant can halt construction. Transplanting #1 and #2 (2021) show crews salvaging plants for storage after strange, bulrush-like plants sprouted unexpectedly after 100 years of dormancy underground. These were likely remnants of the site’s original wetlands, which germinated when sunlight hit the excavated mud. Some of the plants were taken to a greenhouse laboratory at the University of Toronto, and others were transplanted to the Leslie Street Spit, located nearby along the waterfront. Even with the most meticulously planned naturalization processes, nature can still surprise us.

Following their documentation of the processes of destruction and removal required to prepare the site, this third series of work in Ingelevics and Walker’s multi-year project allows viewers to witness the construction of these new, interconnected habitats and structures. Their photographs offer glimpses into the makings of a highly creative built ecology, one that has looked to nature in order to artificially recreate it.

Presented by CONTACT in partnership with Waterfront Toronto. Part of ArtworxTO: Toronto's Year of Public Art 2021–2022

Vid Ingelevics & Ryan Walker
How to Build a River 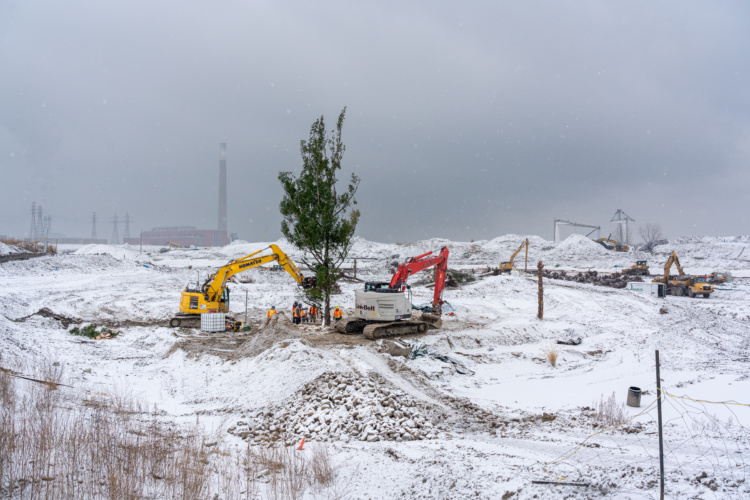 I’m Vid Ingelevics and I’m in my studio in Toronto. My work has generally followed two sometimes interrelated paths: considering the role of the archive in how we represent the past and the nature of urbanity. I do so through a variety of media, including photography and video, often in an installation format.

This is Ryan Walker, and I’m speaking to you from my studio in Toronto. My photographic practice is rooted in a documentary approach to intimate storytelling. I’m propelled by curiosity to explore our modern-day relationship with nature, which is both symbiotic and fraught. I explore these ideas through photography and cinema.

The work we are presenting in CONTACT 2022, titled “How to build a river,” is related to a long-term project that Ryan and I are collaborating on: a five-year commission from Waterfront Toronto to document the Port Land’s flood protection project, one of the most ambitious civic infrastructure projects currently occurring in North America. Our commission specifically mandates us to both document and interpret the vast range of construction work happening across several 100 acres of originally landfilled swamp land at the mouth of the Don River.

This civic project includes the construction of a kilometre of new river mouth for the Don, which will result in a large public park on land that has seen heavy industrial use since the 1920s. This, our third publicly-accessible installation on the site, all curated by Chloe Catan, uses the door of a large concrete silo on Cherry Street, as well as a set of five 12 x 8′ construction grade billboards we have had constructed on Villiers Street, directly opposite the silo.

How to Build a River is a natural progression from our previous two onsite public installations Framework and The Mobile Landscape where we explored the Port Land’s disappearing industrial infrastructure, and the drastically transforming landscape resulting from a massive excavation and earthworks process.

In this third year of the commission, we were drawn to the complexities of the environmental engineering processes as the site progressed. Innovative bio-engineering techniques are used to mitigate industrial-era contaminants and build complex ecologies, all of which will soon be invisible, submerged underwater or beneath park surfaces when the project is completed. As the excavation proceeded, and materials were brought to the site and carefully categorized, prepared, and positioned, we witnessde firsthand the river’s path quickly taking shape. In the photographs Layering Membrane and Crib Wall Installation, we see some of the essential elements and processes used to build a river. Its plants and engineered banks, its roots, rocks, and sands can all be seen coming together in the image titled Meander. These photographs offer a glimpse into the makings of a highly creative constructed ecology, one that is looked to nature in order to artificially recreate it.

At times during this massive project, something as small as an unidentified plant can halt construction. For example, in Transplanting #1 and #2, there was an interesting story behind the activities depicted. As excavation proceeded on the new channel for the river, a section of soil was exposed and left alone for a few weeks. The sun and moisture nourished the soil which resulted in the spreading of 100-year-old dormant seeds of the plant life that once existed in Ashbridges Bay before the Port Land’s were filled in, in the early 20th century. So what the workers are doing in these photographs is transplanting the young plants to Tommy Thompson Park nearby, as otherwise they would be bulldozed as the excavations resumed. In this sense, the green plants in these pictures are living artifacts of Toronto’s waterfront of 100 years ago. This is a reminder that even with the most meticulously planned naturalization processes, nature can still surprise us.

While our installation is publicly accessible, our images depict moments in the construction activities that the public were not able to view behind the nearby hoardings at the time they occurred.

But what we are showing each year has almost inevitably changed by the time of our installations. In that sense as artists, we are messengers and we continue to offer to the public, a recent and subjective visual history of this vast and complex site.