Toronto-based photographer Jorian Charlton uses the power of the gaze to reclaim the Black experience of the photo studio. This large-format mural features a model named Georgia, shown unabashedly caressing herself with fingers adorned in multicoloured, manicured nails. Standing tall and asserting herself, she confronts the viewer while commanding the space around her. Presented on the façade of a Victorian-era building, the work challenges colonial histories and practices of portraiture.

Gaze has weight in Charlton’s portraits. When she made this work, photographer and model locked eyes, sharing a moment of recognition and validation through the lens. Charlton holds a strong place in a lineage of Black photographers who prioritize a collaborative approach to taking photos of people from their community. Often finding models through social media, she is drawn to individuals who epitomize the vibrancy and diversity of the Black community. Charlton shares agency by encouraging models to self-direct their poses and incorporate their authentic style. She also photographs her subjects outside the formal setting of a photography studio and titles her works with their names. This approach to portraiture is Charlton’s way of pushing back at photography’s imperialist history, countering colonial photographic practices, and addressing the rampant over-surveillance of the Black community that continues today. Charlton’s synergistic process is historically and culturally significant—she returns power to Black people, allowing them to determine how they want to be seen.

Georgia’s sexuality is alluring in this portrait; she is comfortable in her skin, confidently basking in the sun. Her fierce autonomy challenges any stereotypes or other narratives that viewers may hold. The building featured in Charlton’s portrait mirrors those surrounding the site of this public installation, testifying to Georgia’s presence as one that belongs on this site and in this city. The image is elevated above street level and enlarged to a massive scale, allowing her to tower over passersby, cementing her presence and drawing attention to the mainstream underrepresentation of Black women, who remain resilient despite this fact. In this work, both model and artist define their identities while simultaneously proclaiming their power.

Charlton’s signature style of portrait, shot using medium-format film, highlights the vast identities present among the children of the African diaspora. Quoted in a 2021 story for The Walrus, Charlton said, “As Black people, we have had a lot of our history destroyed and erased. We don’t often see proof of our existence at museums … I think that’s why the family photo album is so important to Black communities. It’s why I wanted to make my own.” This desire to build on the family album is evident in the artist’s photographs, which maintain intimacy while simultaneously advancing new modes of representation of Black people within commercial contexts. This is why there are whispers in Toronto’s Black community instructing people to say “yes” when Charlton asks to take their portrait.

Embedded in Charlton’s works is a reminder to viewers that they cannot define Black people based on what they have read or been told—every Black person possesses a unique story that is theirs to share. Charlton’s work is celebrated and wields authority because it reflects how Black Canadians view themselves and deserve to be seen.

Also part of CONTACT 2022, Charlton’s work can be seen in her exhibition Out of Many at the Art Gallery of Ontario (December 18, 2021–August 7, 2022) and in the two-person online exhibition fi di gyal dem, presented by Doris McCarthy Gallery (May 5–August 26, 2022). Additionally, Charlton's work is featured in three public installations as part of ArtworxTO: Toronto’s Year of Public Art 2021–2022, at sites on Bay Street, in the financial district, and in the CF Toronto Eaton Centre.

Jorian Charlton is a portrait photographer based in Toronto. Her work focuses on Jamaican-Canadian culture through her personal experiences, highlighting beauty and style when it comes to contemporary modes of Black representation. She pursues reflections of identity and diasporic relationships to homeland, while her poetic approach to these themes characterizes her method of visual storytelling. 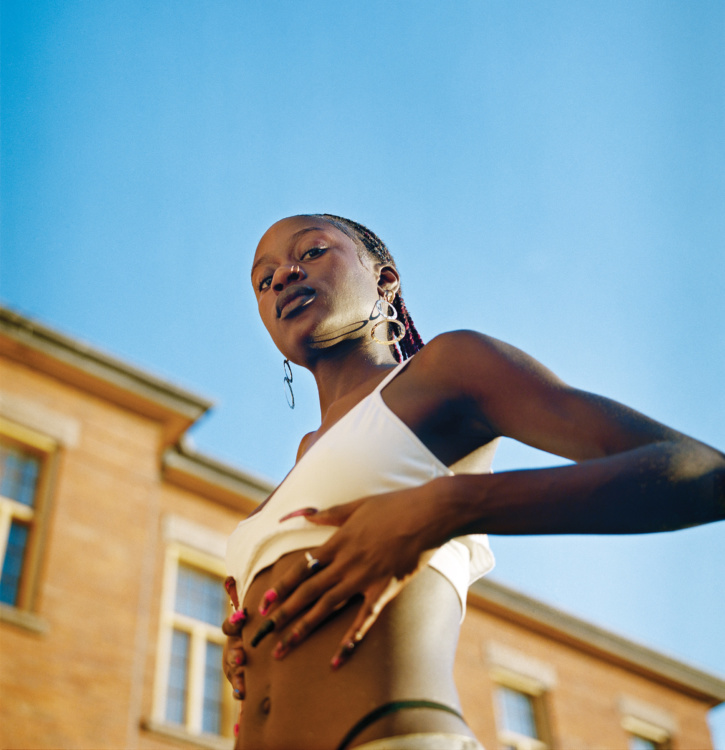 My name is Jorian Charlton, and I’m a photographer based in Toronto. My work explores Jamaican Canadian culture through my personal experiences.

Beauty, style and fashion are highlighted in my portraits. I made the switch from digital to medium-format film during the pandemic, in 2020, after feeling like I wanted the challenge. I prioritize photographing Black people because I want to create my own archive that explores identity, familiar spaces, and advances in new representations of my community. My approach to photography is collaborative and experimental, always giving the people I photograph agency over their bodies.

This portrait, titled Georgia, was created in 2020. Georgia is a force but also a protector. The work is from the series titled Georgia and Kukua, where I photographed Georgia and her younger sister, outdoors in Etobicoke, Ontario. The photo is a continuation of other works I have made with siblings. It is impossible to miss Georgia in this large installation. It’s fitting that she’s towering over people, and this city, because I want Black people to be seen and heard. It’s why I take photos.