*Please note: The exhibition at Doris McCarthy Gallery closes December 11, 2021. The outdoor installations will remain on view until March 2022.

Situated in the Scarborough community of Malvern, Three-Thirty performs a map-making exercise, highlighting and connecting streets, paths home, and the spaces in between. Through a series of commissioned projects incorporating collage, portraiture, archival images, video, and performance, Aaron Jones (Pickering), Ebti Nabag (Toronto), and Kelly Fyffe-Marshall (London/Toronto/Jamaica) interrogate where, how, and with whom knowledge can be centred.

iii.
The cartographer says
no—
What I do is science. I show
the earth as it is, without bias.
I never fall in love. I never get involved with the muddy affairs of land.
Too much passion unsteadies the hand. I aim to show the full
of a place in just a glance.

—Kei Miller, The Cartographer tries to map a way to Zion

Three-Thirty is a multi-site exhibition that draws on youth after-school culture as a site of possibility and meaning making in which young people assert how they mark, claim, and inhabit their community. It is an extension of how youth encode what they create as part of a culture through fashion, language, and the shared presence of their bodies. The act of acknowledging these forms of codification complicates the blanket notion that these spaces, and inevitably the people inhabiting them, are without authority or agency. The project aims to explore how people can influence their environments when they are told they do not have the power to do so. Using the public spaces of local high school Pearson Collegiate Institute, the Malvern Public Library, and the Doris McCarthy Gallery at the University of Toronto Scarborough, Nabag, Jones, and Fyffe-Marshall explore the role of systems, built form, voice, and presence in transforming space.

Working closely with students of Pearson Collegiate Institute, Nabag’s life-size portraits of high school students, Bubble of Youth (2020) celebrate the gestures, body language, fashion, and friendships entangled in the high school experience. Built in the late 1970s, Pearson Collegiate was intentionally designed to use hallways, lighting, and classroom location to replicate the “complete neighbourhood” of the surrounding community. Mounted on one of the school’s external walls, Nabag’s photo-based mural integrates elements of the building’s brickwork and interior design into the imagery, visually weaving together the students and their surroundings to imagine ways young people create their own spaces inside and outside of school. Nabag’s work can also be found at University of Toronto Scarborough, inside and outside the Doris McCarthy Gallery.

For Seeing Knowledge (2020), on the façade of the Malvern Public Library and at the Doris McCarthy Gallery, Jones extends his collage and assemblage practice to create imagery sourced through the branch’s Rita Cox Black and Caribbean Heritage book collection. This resource, housed at only three other Toronto Public Library branches, is recognized as one of the most significant and comprehensive collections of Black, Caribbean, and Canadian literature in Canada. This particular library branch, also sharing the neighborhood recreation centre, is a pivotal cultural marker for young people in Malvern. Jones’ work generates provocative and compelling juxtapositions between Malvern’s archival materials and images found in the Cox collection that speak to issues of Blackness, history, and Canadiana.

Film director Kelly Fyffe-Marshall’s three-channel video installation, POWER (2020), shown at the Doris McCarthy Gallery, depicts recent interviews with an intergenerational group of Black people who are asked what power looks like for them now. The video, a pointed visual of the times, shows interviewees removing their personal protective equipment (fabric face masks) to respond to a question laced with undertones of Blackness, power, and global events. Exhibiting this immersive installation at a university art gallery allows Fyffe-Marshall to reach a local population, while speaking to the complex and multidimensional aspects of community, voice, and sense of place, centred on the voice of Black people.

While Three-Thirty attends to youth living in a particular place, the questions at its foundation extend broadly to ask how spaces, communities, and land are shared, written onto, and transformed by those who are often not seen as powerful. Presented in the era of a Black Lives Matter and a global pandemic, these questions have never been more urgent. 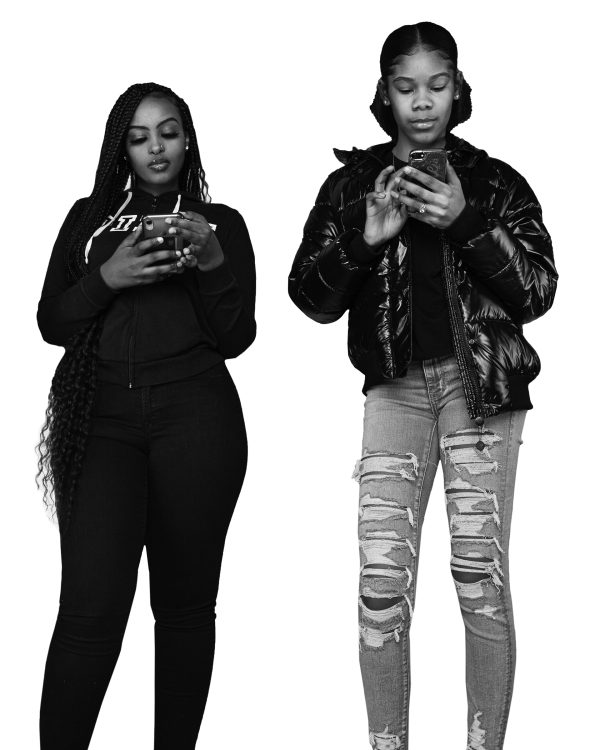 Ebti Nabag: My name is Ebti Nabag and I’m currently speaking from my home studio in Toronto, Canada. I am a documentarian and portrait photographer. I team up with galleries and community centers to develop art programs, and instruct photography programs that provide opportunities for creative self expression, and aid in the development of identity. My personal work is motivated by stories from the average human and I hope that they serve as bridges between people and communities.

Three-Thirty, exhibited in 2020, is centralized in the Scarborough community of Malvern. Three-Thirty investigates the way power is exercised through the construction and manipulation, and occupation of space. My work consists of two public installations and a gallery installation: the life-sized portrait murals of high school students titled The Bubble of Youth, found outside Lester B. Pearson high school and in the Doris McCarthy Gallery, and I’m Listening, found outside the University of Toronto Scarborough Campus. They celebrate the gestures, body language, fashion and friendship entangled in the high school experience. The photo-based murals bring together students and their surroundings to imagine ways young people create their own space inside and outside of school.

I set up a studio in the common area of Lester B. Pearson high school and asked youth to stand in to get their portrait taken. The photos were then combined together to create one narrative reflecting the high school common space. The percentage of youth living in Malvern exceeds the percentage of adults who live there. Therefore, you can’t talk about Malvern without talking about the youth in Lester B. Pearson high school located in the neighborhood.

I recall when presenting the idea of the murals going up on the exterior of the school, some of the students couldn’t grasp that concept and understand why they would want their face to be at the front of the school. And the question is, why not? Why not have their portrait on the exterior of a place that they occupy for the majority of their youth years. And that’s where the question of power comes into play. How do you create space for you to take on leadership roles and make their voice and ideas heard and included in their community?

That’s where the conversation began. The idea that youth don’t understand why their faces should be on the exterior of their high school, something that should be addressed. Placing these public murals in their neighbourhoods where they’re able to encounter them on a day-to-day basis allows the youth to take back their communities. They’re able to see themselves in this grand view, and it encourages them to make their voices heard. I’d like to think that the murals also serve as a reminder to those in power to create opportunities and space for youth to lead their communities.

Anique Jordan: Hi, my name is Anique Jordan, I am an artist and curator and the curator of Three-Thirty. Three-Thirty is a public art exhibition that is centred largely in Malvern in the community of Scarborough, that looks at the ways in which people, particularly considering young people, are constantly told that they don’t have the power, the influence the privilege to impact their environments, but that they’re always doing so regardless.

It started off as me really thinking about what happens to young people between the times of finishing school and making their way into their home. And I was really considering how they use that space, what sort of gestures come up, what sort of language emerges, how they carry themselves, what they think about within that time where they have their own agency. So it emerged thinking about young people, but as everything started happening with COVID, and with the protests going on over the summer of 2020, and continuing now until today, I really started thinking a little bit more broadly about this question, and asking the artists to respond to how power looks within our communities, and how we shape it, even though we’re told we don’t have the right or the ability to do so.

As a curator, I’ve always been interested in these questions. I’ve always been drawn to thinking about the ways we can create public art spaces, or art spaces in general, where people can access them without having to enter a space that makes them feel intimidated or unwelcome. How can we create public art that is visually legible and accessible, both to elders and to children and everyone in between? What does it look like to transform our cities with the work that comes from the people who live there? And what sort of questions do we ask and answer when we see art available for us within our own hometown?

These are the questions and the impulses that I brought to artists Aaron Jones, Ebti Nabag and Kelly Fyffe-Marshall, two of whom created public art exhibitions for Three-Thirty. The public art pieces for Three-Thirty are done at two really important locations in Malvern, the public high school, which is called Pearson Collegiate, and the Malvern Public Library, which also doubles as the main Recreation Center.

Ebti Nabag’s project The Bubble of Youth was done through collaboration with students of the high school in which the works appear on over several weeks we visited the school where empty conducted workshops with the students and eventually set up a studio inside the auditorium where students came with friends and crews to have Ebti document them. The composite is what you see as two massive black-and-white images on the building. What I love about this image is that we may never see something like this again, where youth can pose in school so closely together with friends, people who are considered family to them without masks on. We were able to shoot this right before COVID began, and now it seems like it’s eons ago.

Just a few blocks down the street you’ll find the second piece, by Aaron Jones. Aaron is a collage-based artist who produced a 124-foot-long collage. It’s situated on the front-facing glass facade of the Malvern Public Library. Aaron’s work worked closely with the Rita Cox Black and Caribbean Heritage Book Collection, which is one of the largest public book collections of Black and Caribbean writers in Canada. He used the images of the covers and inside of the books to create this mural.

We spent the last three years working on this project; it’s been a complete labour of love. And to see it manifest in this way and being taken up by the community the way it is, particularly in a time where so many of us can’t enter gallery spaces or art spaces, it’s been amazing to be able to have work to point residents of Scarborough to, to say this has come out of this community, and it’s for this community.