Co-presented with the John H. Daniels Faculty of Architecture, Landscape, and Design

For more than 20 years, Guelph-based artist Susan Dobson has photographed urban landscapes and architecture. Her new site-specific project Back/Fill (2019) explores the detritus of Toronto through images of construction debris dumped at the Leslie Street Spit. Featuring a massive mural adhered to the north elevation of the new Daniels Building and large-scale photographs mounted within, the project raises questions about the cyclical nature of the built environment’s material character, with its phases of demolition, construction, preservation, and renovation. Dobson’s interest in Joseph Schumpeter’s economic theory of “creative destruction”—an incessant cycle in which innovation brings about the destruction of what existed before—informs this project.

Commonly known as Tommy Thompson Park, the spit is a manufactured peninsula and wilderness reserve built entirely from Toronto’s clean construction waste. Much of the rubble depicted in Dobson’s photographs can be traced to buildings demolished in the downtown core around 1980, a period when houses and significant 19th-century brick buildings were torn down to make room for steel-and-glass business towers symbolizing the city’s progress and economic prosperity. Debris from the recent renovation of the Daniels Building—a storied structure that began its life as Knox College—and the construction of a modern wing by architectural firm NADAAA were also dumped at the spit. Today the Daniels Faculty is a leading venue for study, research, and advocating for architecture, landscape, urban design, and the visual arts.

Dobson’s panoramic mural on the building’s glass façade stretches between two sloped earth walls. Her image reveals layers of rubble, creating the illusion of backfilling with material culled from the Daniels Building’s demolition and construction. In effect, Dobson creates a series of “plausible fictions”: that the site’s discarded construction debris has somehow returned, and now re-occupies its former location; or perhaps, that fragments of other demolished downtown buildings, now vanished, have opportunistically reappeared as backfill to claim a prominent location within the city’s “new” downtown.

To create the mural, Dobson digitally stitched together multiple photographs captured at the spit. Up close, viewers are immersed in the minutiae of the debris; small details and inscriptions are discernible. From a distance, the image is seen in concert with its environment—activating the building and earth walls, while evoking associations with excavated ruins.

Inside the Daniels Faculty, Dobson’s photographs of construction remnants retrieved from the spit—such as wire, brick, and piping—are positioned in its main public space. Affixed to custom-built support structures adjoined to elements of the building, the works activate dialogues with the surrounding architecture and creative community. Formerly lost in the spit’s jumbled anonymity, these artifacts assert new identities here, simultaneously architectonic and anthropomorphic, minted through the persistence of their material specificity. Writ large in Dobson’s highly detailed photographs, these fragments of a former time and place appear intensely present, as characters with a past. Back/Fill questions the endless cycle of architectural destruction and displacement. While recognizable artifacts within Dobson’s re-situated debris may elicit memories of Toronto’s lost architectural history, they also foreshadow a future past: this will have been. 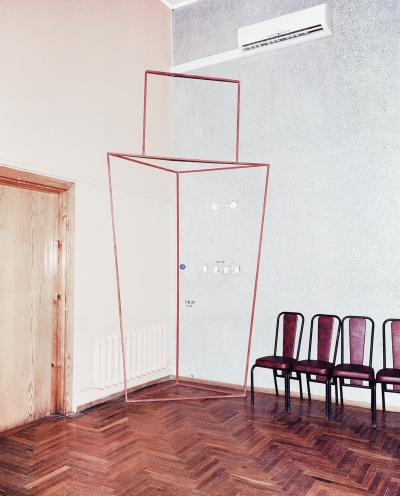