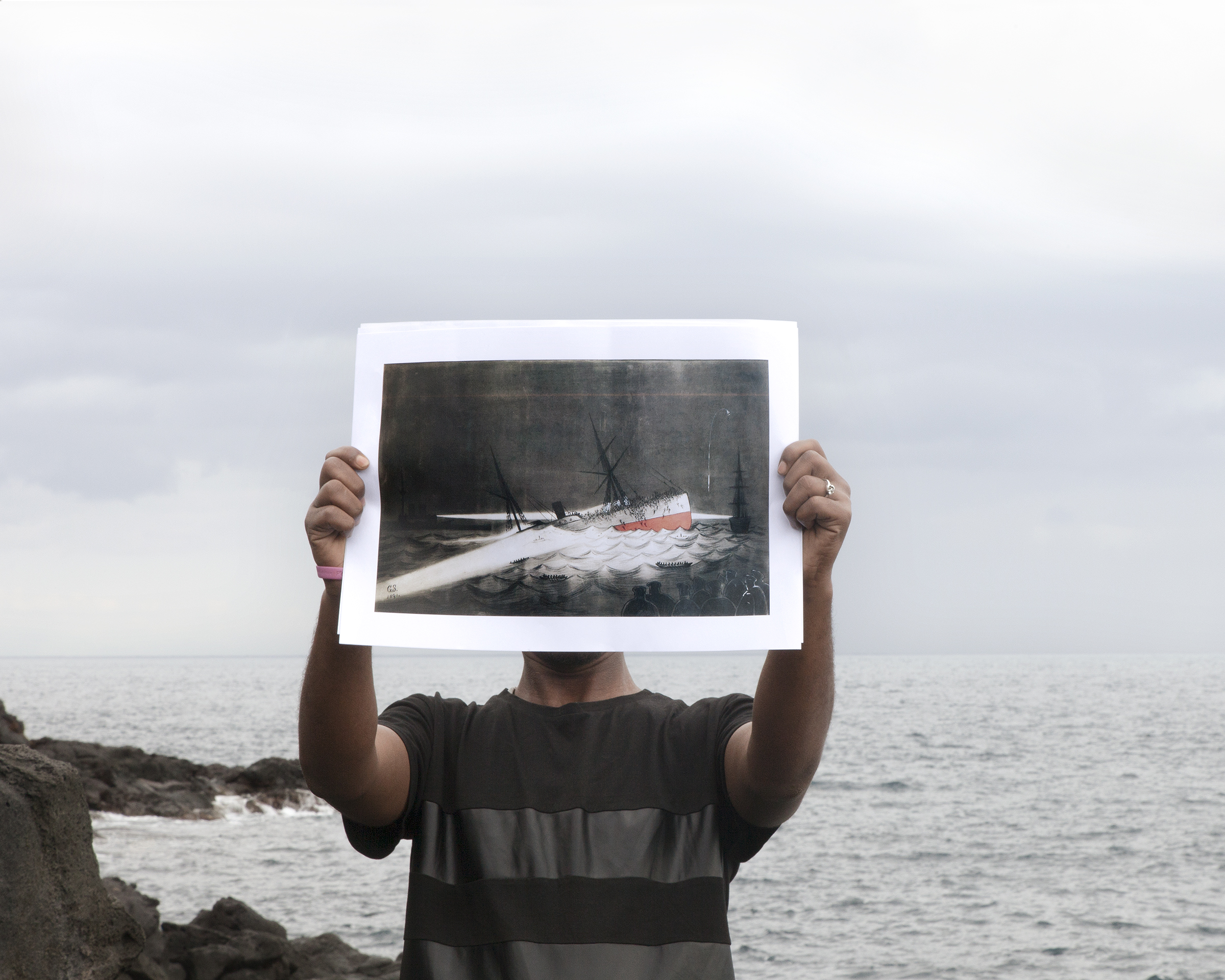 Dawit L. Petros examines links between colonization, migrations, and modernism in his work.

The Eritrea-born artist created Untitled (Overlapping and intertwined territories that fall from view III), (2019) in Catania, Sicily, which has been Italy’s largest reception site for migrants crossing the Mediterranean, and a bureaucratic purgatory from which immigrants are desperate to escape. Here, the country comes face-to-face with the aftermath of its 19th- and 20th-century colonization campaigns in Africa.

The subject depicted, Mokhtar, has embarked on a perilous journey from Eritrea, through Sudan, Egypt, Libya, and across the Mediterranean to Italy. With the sea as the backdrop, his arms hold up an image that conceals his identity. He grasps a reproduction of an etching by Georgina Smith, an eyewitness to the sinking of the transatlantic steamship SS Utopia. In a tragic accident on March 17, 1891, the SS Utopia—used frequently to transport European immigrants to the United States—collided with a battleship off the shores of Gibraltar and sank quickly, killing over 500 passengers, many of whom were poor southern Italians seeking better lives across the Atlantic Ocean.

Mokhtar’s gesture conjures this historical event, showing the connection between past and present migrations. By drawing attention to long-standing migratory flows between Europe and North America, when numerous immigrants risked everything in pursuit of improved opportunities elsewhere, Petros evokes the plight of contemporary African migrants fleeing difficult circumstances and who aspire for more prosperous lives in Europe.

Italy’s colonial history ties these two well-known patterns of migration together. While African migration to Italy has become fodder for a resurgent populism that pits those seeking refuge against a supposedly pure Italian identity, politicians overlook the fact that these same immigrants were colonial subjects in the not-too-distant past. Many of the immigrants, particularly those from East Africa, have grown up with the legacy of Italian colonization, and seek to enter the country out of a peculiar, one-sided sense of familiarity. Moreover, nostalgic representations and heroic tales of Italian immigration to the new colonies in Africa or North America contrast sharply with how migrations are portrayed today, where the individual identities of African migrants tend to be erased and presented en masse as a “crisis” for Europe and North America.

This waterfront site emphasizes the significance and meanings of water in the work. While Lake Ontario tends to be associated with recreation, the bodies of water in Petros’ image evoke grave connotations, from the complex history of colonization to the tragedies that face contemporary migrants. The work prompts viewers to consider water as a contested space that at times brings together, and at other times separates, people and places.

Petros employs photography here to examine parallels between African and European histories, and investigate how images and objects can obscure power differentials while connecting people across borders, thus binding disparate geographies such as Italy, Eritrea, and Canada.

This billboard by Petros, who lives and works in Chicago, is presented alongside his exhibition at The Power Plant, Spazio Disponibile, Italian for “Available Space,” on view until May 10, 2020.