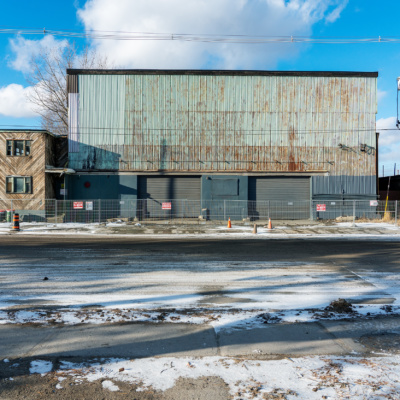 In the summer of 2019, Toronto artists Vid Ingelevics and Ryan Walker began photographing one of the most ambitious civil works projects in North America. Tasked with documenting the five-year transformation of the Port Lands from 290 hectares of flood-prone, industrial brownfield into usable parkland and urban infrastructure, they have witnessed changes happening daily, sometimes hourly, to Toronto’s eastern waterfront. For Framework, Ingelevics and Walker create a visual pathway of construction-grade wooden frames installed between two industrial sites in the Port Lands. These frames display photographs taken through windows and apertures of buildings since demolished, as well as other impermanent structures on the site. The path guides viewers along the grassy median on Villiers Street, from the silos of the defunct ESSROC cement plant on Cherry Street—now a heritage site, where the artists have installed a photomural—to the vicinity of a former metal recycling facility at 130 Commissioners Street, now an empty field. The images offer viewers the opportunity to contemplate the transformation of the Port Lands, while at the same time reflect upon how heritage designation is, in effect, an inevitable form of curation of the city’s industrial past.

The windows, or frames within frames, draw attention to different aspects of the renewal. In one, a fan, newspaper, boom box, open logbook, and pack of cigarettes are arranged on a time-worn desk that looks out onto the future Cherry Street bridge site. Taken from the now-defunct control cabin of the old lift bridge, the photograph was made during one of the last times the bridge was activated. In another, layers of peeling paint mushroom like fungus around a window. Among the trees outside stands a viewing platform that overlooks the excavation of the Don River, just one element of the massive Port Lands Flood Protection Project. In other photographs, piles of broken concrete and twisted steel observed through mud-flecked glass or half-drawn blinds are a testament to the intensity of the demolition activity. Together, these collected apertures provide evidence of time’s passage, serving as both a historical record of the area and a view into the rapidly transforming space.

As a child during the 1950s and 1960s, Ingelevics recalls roaming the truck-loading docks along Commissioners Street, where his father worked for Smith Transport. Over time, that building, along with others, was demolished as industrial uses in the area waned. Now, as the transition from industrial to urban continues, the recycling plant at 130 Commissioners Street has also been torn down, making space for a park. The artists documented the building’s cathedral-like interior prior to demolition, and have adhered a photomural of the site onto the door of one of the defunct ESSROC cement silos, creating the illusion of an expansive, interior space within the silo. The superimposition raises questions about the value system of heritage designation. Both structures were built in the mid-20th century, yet only one remains today. What determines whether a property is worthy of designation? What are the signifiers of a building’s cultural heritage value? Are interior and exterior aesthetics hierarchized? Cities, if anything, are defined by constant change. Framework records such a moment in Toronto.